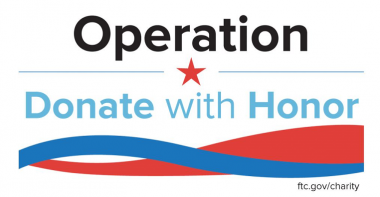 In an effort to “crackdown on fraudulent charities that con consumers by falsely promising their donations will help veterans and servicemembers,” the Federal Trade Commission (FTC), along with law enforcement officials and charity regulators from 70 offices in all 50 states, the District of Columbia, American Samoa, Guam and Puerto Rico, announced more than 100 actions and a consumer education initiative called “Operation Donate with Honor.” The July 19th, 2018 announcement by the FTC describes that “[o]ne striking feature of the more than 100 actions … is the breadth of the alleged illegality.” Misleading door-to-door campaigns and solicitations outside stores, bogus raffles, deceptive direct mail, illegal telemarketing, and false statements on websites are listed among the ways donors were allegedly “duped” by the defendants. Instead of using the funds raised to serve veterans and the military, some of the bad actors “simply kept the cash,” and others “spent the lion’s share on their own salaries and to hire for-profit fundraisers,” according to the FTC.

A number of Veterans & Military charities that have received “F” ratings from CharityWatch are included in the “Operation Donate with Honor” enforcement actions. Although it ceased operating at the end of 2017, of particular note is Help the Vets, which CharityWatch warned donors about in our September 2016 article titled, Multiple Names + Exaggerated Programs = Two Related Charities, But Little Help for Vets or Cancer Relief. The complaint filed by the FTC and six states against Help the Vets and its former president, Neil G. Paulson, Sr., includes allegations of making false or misleading claims in charitable solicitations. It is also alleged that between 2014 and 2016 Help the Vets spent 95% of donors’ contributions to pay Paulson, for-profit fundraisers, and overhead expenses, with any benefit to veterans being “merely incidental.” A proposed settlement in the case imposes a judgment of more than $20.4 million, representing donations collected by Help the Vets from 2014 through 2017. The judgment, however, will be partially suspended when the charity pays $72,122, which constitutes all of its remaining funds, and Paulson pays $1.75 million, an amount that is more than double what he was paid by Help the Vets, according to the FTC. The payments will be contributed to one or more legitimate veterans charities approved by the court. In addition, Paulson will be banned for life from having oversight of charitable assets.

Foundation for American Veterans (FAV), Healing Heroes Network (HHN), and VietNow National Headquarters (VietNow) are a few of the other “F”-rated charities named in the “Operation Donate with Honor” crackdown. Based on their last CharityWatch rating, FAV, HHN, and VietNow had spent only 11%, 9%, and 4%, respectively, of their cash budget on program services for veterans. Fortunately, FAV, HHN, and VietNow have each recently dissolved or been shut down so they will no longer be a threat to mislead donors or waste funds that otherwise could be used by well-run veterans charities.

Foundation for American Veterans had received an “F” rating from CharityWatch dating back to at least FAV’s 2009 fiscal year. In May 2016, CharityWatch alerted donors about the fake “pledge reminders” and other deceptive statements allegedly being used in fundraising solicitation campaigns on behalf of FAV, according to a lawsuit filed by the Attorney General of Minnesota. Also in May 2016, the state of Michigan began a civil and criminal investigation into FAV for the alleged diversion and misuse of charitable assets, breach of fiduciary duties, and deceptive solicitations. FAV elected to voluntarily dissolve in response to the Michigan Attorney General’s investigation, but the criminal investigation is still pending, according to the “Operation Donate with Honor: List of Enforcement Actions, July 19, 2018.”

After giving VietNow National Headquarters an “F” rating for almost 20 years, CharityWatch informed donors in November 2017 of its shutdown. VietNow’s shuttering was part of a settlement agreement that was led by Illinois, California, Michigan and Ohio, and joined by 20 other states. The allegations against VietNow included misleading donors as to who was soliciting donations and how donations were actually used; as well as spending “the overwhelming majority of donations” on for-profit professional fundraisers and other administrative costs rather than on programs for veterans, according to the Illinois Attorney General’s November 6th, 2017 press release.

“Operation Donate with Honor” is another reminder for donors to be especially vigilant when giving to charities that claim to serve the military and veterans. A nationwide enforcement crackdown like “Operation Donate with Honor” is a very positive step, but the odds are that deceptive veterans charities will remain a problem. The good news is that donors can avoid fraudulent and sham charities by trusting CharityWatch. Our Top-Rated charities provide donors with plenty of wise-giving options. So the next time you want to support our troops and those that have courageously served our country, use our list of Veterans & Military Top-Rated charities to help ensure that your donation will be spent efficiently on truly charitable veterans causes.

Veterans and cancer are two of the most popular charitable causes to which Americans direct significant donations. While these two causes seemingly have little to do with one another, one set of charities proves otherwise...

Veterans and cancer are two of the most popular charitable causes to which Americans direct significant donations. While these two...