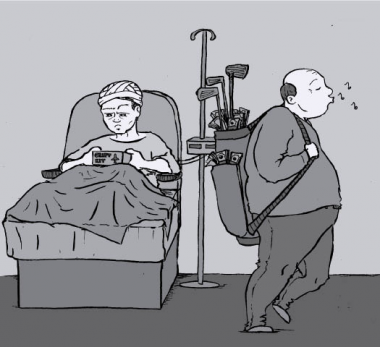 Two decades ago Roger Chapin, the past president and founder of Help Hospitalized Veterans (HHV), and I appeared as guests on a CBS News program called America Tonight.  The late Charles Kuralt, a co-host of the program, told me that during his long career as a journalist he had never witnessed the stunt that Mr. Chapin appeared to pull that night on live television.

Chapin went on the program to promote HHV’s G.I. Christmas Gift Pac in which the charity planned to send cookies, candies, crackers and other snacks to soldiers in the Persian Gulf. I went on the program to point out that HHV had spent an inadequately small portion of its budget on its stated purpose—to provide craft kits to injured veterans—and that $1 million of donations to aid veterans was instead transferred in fiscal 1990 to two anti-drug charities that Chapin also operated, one of which advocated mandatory drug testing in offices and schools. We certainly had enough material for a lively debate.

Kuralt and I were in a TV studio in New York and Chapin was in a studio in Washington, DC. Chapin was first given the opportunity to tout his Gift Pacs in a prerecorded video at a warehouse that assembled the Gift Pacs.  After Chapin was introduced, he acted as if he couldn’t hear Kuralt or me when we started asking him tough questions about his track record.  Instead of answering our questions, he went on and on… lavishing praise on HHV.  Before and after the live segment aired the CBS sound technicians had tested both the studios’ headphones and microphones and they all worked.

After decades of poor ratings from CharityWatch, numerous critical articles, and even being the focus of U.S. Congressional hearings in 2008, HHV, its officers, directors, outside accountant and one of its fundraising companies were sued in August 2012 by the Attorney General of California.  The complaint, the People of the State of California v. Help Hospitalized Veterans et al., alleges that over $4.3 million in charitable funds were diverted from helping veterans and instead used to enrich HHV’s officers and fundraisers.  The suit seeks the removal of HHV’s officers and directors for allowing self-dealing, excessive compensation, fraudulent fundraising and other unlawful activities to occur.

As I did in my 2007 Congressional testimony on veterans charities, the AG alleges in its lawsuit that HHV disseminated false information to potential donors and used accounting gimmicks in order to inflate the amount it reported spending on charitable programs.  This made HHV appear to be more efficient at raising money than it really was, according to the complaint. HHV’s attorney, Hugh Quinn, insisted in a phone call to me that his client followed appropriate accounting rules. The complaint points out questionable activity and reporting, including violating IRS rules by wrongly claiming more than $40 million in “donated services” (public service announcements and shipping discounts) in fiscal 2002-2011 tax forms, even though in the very same tax forms for that time period HHV stated it did not receive “donated services.”  Also, fundraising expenses of 65 percent were unfairly reported by HHV as being less than 30 percent from 2003-2011, according to the complaint.  The good news for CharityWatch members is that in our ratings, CharityWatch analysts had already caught and corrected all of HHV’s bad reporting cited in the AG’s lawsuit.

The lawsuit accuses Chapin of receiving more than $2.3 million in excessive compensation during his last seven years at HHV, including a retroactive salary raise to “spike” his pension benefits.  CharityWatch expressed our concern about Chapin’s payout in our 2010 article, Congressionally Scorned Charity Leader Receives $1.9 Million.  The complaint also alleges that during this time period an officer of HHV, Michael Lynch, “received more than $900,000 in excessive and unreasonable compensation.”

HHV has continued its earlier practice of diverting assets to organizations founded by Chapin with different charitable purposes. In 2001 HHV granted $500,000 to one new charity started by Chapin called Conquer Cancer and Alzheimer’s Now (CCAN) and failed to disclose this grant in its tax forms, according to the lawsuit.  CCAN was just one of more than thirty charities and advocacy projects that Chapin started over his 40+ year career as a self-described “nonprofit entrepreneur.”

Some of HHV’s alleged diversions of funds were not even charitable. The complaint states that HHV lost $150,000 on a Virginia Condo investment and spent $80,000 on golf club memberships, which Chapin defended as “a perk” for board members.  It further states that reimbursements were given to Chapin’s wife, Elizabeth, for gifts she had made to an owner and employees of HHV’s main fundraising vendor, American Target Advertising (ATA).  ATA and its owner Richard Viguerie were not named as defendants in the lawsuit.

The complaint alleges that ATA received about $800,000 in loans from HHV during 2003-2006, which were not paid back in full.  HHV’s attorney said that these were payments on contracts or advances rather than loans.  ATA charged HHV more than $9.9 million in fees for direct mail services over a four year period ending in fiscal 2006, according to HHV’s tax forms.

Chapin and his close friend Viguerie agreed that ATA would reimburse CCAN $500,000 for purported earlier direct mail campaigns that ATA operated for that charity, according to the lawsuit. The lawsuit also alleges that sometime during 2006-2007 ATA and another Viguerie owned fundraising company made deposits to CCAN of $497,000. This allowed Chapin to pay himself $493,000 from CCAN’s bank account, which he allegedly chose to do rather than refund HHV for the questionable $500,000 grant it had made to CCAN in 2001.  The complaint alleges that Chapin “fraudulently concealed the payments he received from ATA through CCAN’s account and hid the fact that he destroyed CCAN’s documents or caused them to be destroyed.”

HHV’s attorney told CharityWatch that “HHV for the past 40 years has done everything that it can to help veterans without taking any employee or directors’  financial motivation into account,” and “HHV looks forward to clarifying misimpressions made by the allegations” of the California AG.

"F" rated HHV and CharityWatch Hall of Shame member, Roger Chapin, who proclaimed in front of a packed Congressional Hearing in 2008 that he was “the most honest person in the room,” will now have the opportunity to defend this statement and many others in a court of law.

With over 20,000 Americans wounded in the ongoing Iraq and Afghanistan wars, and as many as 200,000 homeless veterans which account for one-third of the adult homeless population, veterans and military charities need to accomplish...

With over 20,000 Americans wounded in the ongoing Iraq and Afghanistan wars, and as many as 200,000 homeless veterans which accoun...

Roger Chapin, a self-described "non-profit entrepreneur," retired last year from the charity he founded in 1971, Help Hospitalized Veterans (HHV), after nearly forty years as president of the group. Chapin's charity was roundly cr...

What happens when you donate one dollar to an F rated charity that gives it to another F rated charity? In the case of The Veterans Fund and Help Hospitalized Veterans (HHV), about a nickel's worth of program services is all...

Americans, whether or not they favor our military's involvement in Iraq, Afghanistan or other conflicts, care deeply about the plight of our nation's wounded veterans. We want to do something to help our brave wounded warriors. Un...

Americans, whether or not they favor our military's involvement in Iraq, Afghanistan or other conflicts, care deeply about the pli...

Despite having raised donations amounting to tens of millions of dollars from well-meaning donors while using significant portions of it to enrich himself, Roger Chapin was an expert at maintaining a positive public image...

Despite having raised donations amounting to tens of millions of dollars from well-meaning donors while using significant portions...

Another startling fact concerning the "F" rated Help Hospitalized Veterans (HHV) has come to the attention of CharityWatch...

Another startling fact concerning the "F" rated Help Hospitalized Veterans (HHV) has come to the attention of CharityWatch...

Despite a history of misconduct during her time working for the U.S. Department of Veterans Affairs as Director of National Programs and Special Events, Diane Hartmann has been appointed the new CEO of HHV...

Despite a history of misconduct during her time working for the U.S. Department of Veterans Affairs as Director of National Progra...