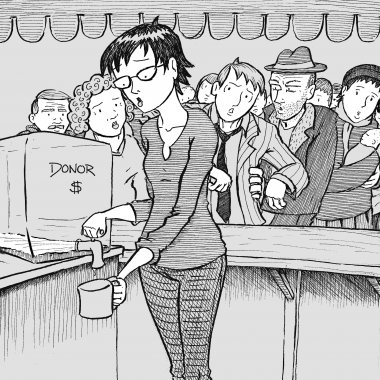 Not since the Great Depression of the 1930's has the economy wreaked such havoc on the lives of ordinary Americans. The interactive effects of job layoffs, home foreclosures, tightening credit, state and municipal government funding cutbacks, and the financial market meltdown all contribute to the worsening of the global economy. Some people who gave a year ago to charity are now asking for charity. Many charities are being squeezed. They are being asked to provide increasing amounts of aid to the needy while their contributions are flat or decreasing. As bleak as these times may seem, they are not nearly as bad as they were in the 1930's. Our present single-digit unemployment rate is a lot smaller than the 25% rate that existed during the Great Depression, which also had a 42% drop in jobholder wages. Also, since then the government and nonprofit organizations have created numerous safety nets, e.g. Social Security and Medicare/Medicaid, food stamps, day care services, microloans, etc... Hard numbers for 2008 charitable giving are not yet available, but indications are that overall they did not fall off a cliff. According to a Center on Philanthropy at Indiana University study, two-thirds of the charity fundraisers surveyed reported that donors who gave them $1,000 or more in the past gave the same amount or increased their annual contribution to their organizations. The Salvation Army reports that last Christmas donations given via the Internet jumped over 27%. While most charities will suffer a decrease in income in 2009, AIP predicts that the rate of decline will not be as great as the ones in the banking and construction industries. While 58% of the 100 largest United Ways anticipate a fall in contributions in 2009, they expect an overall decline in contributions of only 2% to 5.6%, according to a United Way of America survey conducted last December and January. Charities are maintaining their programs by reaching out to their loyal, deep-pocketed supporters to fill in the cracks in their budgets. Some are asking stretched donors for loans rather than gifts. Even with nonprofit staff and program reductions, tens of thousands of weaker charities will not survive the current recession. Paul Light, a New York University professor, predicted in an article in The Wall Street Journal of January 24, 2009 that up to about 10% of the over one million charities in the U.S. will fail over the next year. Many worthwhile charities will unfortunately have to shut down due to a lack of funding. This is not all bad news since many of these charities will merge or have their programs picked up by stronger and more efficient operators that can better serve people. Other charities will survive by stretching their budgets through combining or sharing operations, such as human resources, legal, accounting, etc... Local arts groups that are typically dependent on corporate and foundation support in addition to event ticket sales have taken a severe beating during this recession. The 67-year-old Connecticut Opera, the 77-year-old New Dance Group in New York, and the 43-year-old International Poetry Forum based in Pittsburgh have all recently announced plans to close this year. In addition to funding social and human services charities, donors may also want to consider funding well-run arts and other types of groups that uplift our spirits and improve our environments. Be wary of overly aggressive fundraisers that paint too dire a picture of their organization's financial situation and overstate the urgency of the aid that it wishes to distribute. They may be trying to scare the money out of your wallet before you have a chance to thoughtfully consider the merits of their cause. Also, if the charity is as bad off as they claim, it may close shop before your contribution can be utilized to help someone. Many charities have implemented hiring freezes and mandatory time-off without pay to conserve cash. Some charities that do not have the budget to hire additional staff are hiring fundraising personnel on a commission basis. In other words, the new hire doesn't get paid unless she raises the money for her own salary. AIP frowns upon this practice because it can lead to solicitors putting excessive pressure on donors, who may be so put off by this treatment that they will not support the group in the future. Donate "when there's blood in the streets, even if the blood is your own" is a philanthropic spin on the 18th century financier Baron Rothschild's famous line about investing during a crisis. Sadly, many donors have lost a major share of their investment portfolios in the past year. Fortunately, most of us still have enough remaining to take care of ourselves and our families as well as to help others by giving to worthwhile nonprofit organizations.