Your Donation Will Be Matched! Well, Not Really.

It has become common practice for charities to conduct “matching gift” campaigns. Donors are promised that their donations will be matched dollar for dollar up to a certain amount if they make donations within a specific time frame. Common pitches often go something like this:

"A generous board member has agreed to match all donations received by the end of this week up to $10,000!”

“Act fast! Any donation you make in the next hour will be doubled!" 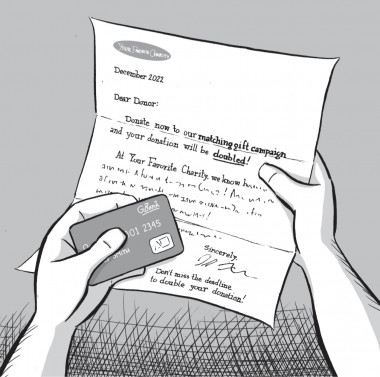 Charities use such campaigns to encourage people to donate more and to do it quickly, often without allowing donors adequate time to understand if a particular charity will use their donations efficiently and effectively. Not only do such fundraising campaigns encourage uninformed giving by placing an artificial time limit on the impact of donations received, but also, the promise that donations will be “doubled” is often not even true—at least, not in the way many donors think.

Often, charities are already in possession of the money that they will use to "match" your donation. A charity may create an arrangement with a board member or other loyal donor to put their donation into a purpose-restricted fund. Based on the agreement, this donor's restricted contribution can only be used to "match" donations from other donors. Each time a new donor contributes in response to this matching gift campaign, the restriction on that portion of the purpose-restricted donation is released, and the charity is free to use those funds for its general operations. In simpler terms, the charity is just moving money it already has in its possession from one internal account to another.

For example, say a charity arranges to put a $5,000 donation from one of its board members into a purpose-restricted fund that can only be used for matching gift campaigns. The charity already has the funds in its bank account when it conducts the fundraising pitches you see in letters, emails, and other advertising promising that any donation you make will be “doubled.” When you make a $100 donation to the charity in response to the matching gift campaign, it then moves $100 of the board member’s $5,000 donation from its purpose-restricted fund into its general operating fund. At this point, the $100 is no longer purpose-restricted, and the charity is free to spend it on any mission-related expense. Your gift was not really “doubled” in the sense that no new money was received by the charity as a result of your donation.

In some cases, the purpose restriction on such a donation is legally binding. Meaning, if during the matching campaign the charity fails to raise enough new donations in an amount that equals the total of the original purpose-restricted donation, the donor has the right to ask the charity to refund the unmatched portion. Referring back to the example above, say the charity raised $4,200 in donations as part of its matching gift campaign. In theory, the board member who gave the purpose-restricted $5,000 could demand that the charity refund $800 to them since that portion of their donation went unmatched. In practice, however, a charity’s loyal donors and board members are unlikely to ask for refunds. Instead, they may choose to simply release the restriction on the remainder of their donation in lieu of a refund so that the charity can use it to fund its general operations.

Another way that some charities use semantics to convince you that your donation will be “doubled” is to arrange for a board member or other loyal donor to pledge what is known as a conditional grant. To continue with our example, with the permission of its major donor, a charity may use marketing language in its fundraising pitches saying that it will not receive the $5,000 “matching” pledge unless other donors step up and collectively make an additional $5,000 in new donations. In this situation, the charity does not yet have the matching donor’s $5,000 in its possession.

Let’s say the charity falls short of its fundraising goal and raises only $3,500 during the matching campaign. In theory, depending on the nature of the agreement between the matching donor and the charity, the matching donor could either donate $0 to the charity since it failed to meet its $5,000 goal, or they could make a $3,500 donation to the charity to match only the amount raised from other donors during the campaign. In practice, however, a major donor who cares enough about a charity’s mission to be willing to make a $5,000 donation is unlikely to punish the charity by withholding the full amount of their pledge just because it failed to meet its fundraising goals. If anything, a charity that is struggling to raise matching donations arguably      needs its major donors to step up their support even more to cover any shortfalls, which such donors are often willing to do.

In the most extreme cases of marketing language gone wild, a charity’s matching gift campaign may be completely contrived. A nonprofit may choose to transfer a certain amount of money from one of its internal accounts to another and then promise to use this money to "match" any new donations it receives within a certain time frame up to a certain amount. In other words, there were never any donor restrictions on these funds preventing the charity from spending them on any mission-related expense. The matching campaign is pure fiction, and the charity may spend these funds on any charitable purpose whether or not it meets its matching campaign fundraising goals. The charity’s decision to use certain funds it already has in its possession as part of a matching gift campaign is an internal decision made by the charity, not a legal restriction imposed by a donor or a conditional grant.

Confirming That a Matching Campaign Is Legitimate

There is rarely a surefire way to know that your donation will really be doubled when giving in response to a matching gift fundraising campaign. Asking the charity point blank if its matching campaign is legitimate doesn’t solve the problem, as it is easy for charities to claim that their matching donors technically don’t have to fulfill their pledges unless you donate first. As previously explained, matching donors are often board members or other loyal supporters of the charity who will make substantial donations even if a particular matching campaign is unsuccessful. Charities aren’t required to disclose to you any private arrangements they may have made with such stakeholders about restricting their donations as a marketing scheme to drum up more support on the promise that donations will be “matched” or “doubled.”

The online aggregator, Charity Navigator (CN), which publishes largely automated ratings on thousands of charities based primarily on their self-reported, unaudited tax form data, recently sent out an email encouraging donors to reach out to charities that conduct matching gift campaigns: “…[A]sk if they conduct independent, annual audits and if their auditors review match campaign documentation. The answer you’re looking for is a resounding yes, which you can confirm via the ‘Audited Financials Prepared by Independent Accountant’ metric included as part of their Charity Navigator Finance & Accountability score.”

CharityWatch strongly disagrees with this nonprofit trade association mentality suggesting that the existence of an independent audit somehow provides assurance to donors that a charity’s matching campaign is “legit.” Charities must check a box on their annual tax Form 990 indicating if they had an independent audit of their finances conducted for the reporting year. However, the results of such an audit are not included in this reporting. A charity could have an adverse opinion audit reflecting that its auditors found that the charity’s financial statements are misrepresented, misstated, and do not accurately reflect its financial performance and health, for example, and still correctly check “Yes” on the tax form in response to the question about whether or not an independent audit was performed. Simply knowing that an audit exists, but not knowing its results, is of little value to donors who are trying to understand if a particular charity is complying with Generally Accepted Accounting Principles (GAAP) or judge the metrics of a charity’s finances and accountability. Even charities with “clean” audit results can easily use matching campaign marketing tricks while still complying with GAAP. The fact that an independent audit exists does not in any way ensure that donations have actually been “doubled” during a matching gift campaign.

While many matching gift campaigns amount to little more than ethically questionable marketing spin, there are a handful of situations in which the donations you make really will be matched. For example, many companies, particularly large corporations, promote cultures of giving back (and gain some public goodwill in the process) by allowing their own employees to have a say in which charities the company supports. Such companies will maintain what are known as matching gift programs in which they agree to match their employees’ donations to certain charities. An employee will typically need to complete some paperwork to effectuate the match.

Capital campaigns are another form of matching. For example, if a nonprofit hospital or museum needs to raise $20 million in order to add a new wing to one of its buildings, it might engage in a capital campaign to cover the cost of this expansion. A wealthy donor may be found who wants to contribute $5 million, but only on the condition that the charity can prove it has received commitments from other donors for the remaining $15 million balance needed to complete the project. If the charity is unable to raise the remaining $15 million, then such a donor reasons that the project they want to help fund will not be able to be completed and will choose to retract their conditional pledge.

Capacity-building campaigns function similarly. A charity that wants to scale-up its capacity so it can expand the scope or scale of its programs might be asked by potential major donors to prove that it has enough diversity of support from other sources to sustain these scaled-up operations in future years. For example, if a charity with a $1 million annual budget wants to scale-up its operations to a $5 million annual budget, a major donor or foundation that is willing to donate $2.5 million for capacity building may want to know that the charity's expanded operations won't collapse if in a future year if the donor chooses to not continue granting this level of support. In these cases, matching campaigns are used as one way to gauge stakeholder interest in providing ongoing financial support. Such a foundation might propose that they will donate $2.5 million to the charity's capacity-building campaign only on the condition that the charity can raise the remaining $2.5 million from other donors.

The marketing language that some charities use for their matching gift campaigns may be misleading, may promote impulsive giving, and may cause some people to donate only because they think their donation will really be “doubled,” when perhaps they wouldn’t have donated otherwise. Rather than trying to figure out which matching campaigns are legitimate, a better rule of thumb is to not be drawn in by the marketing language of these campaigns and the impulsive decision making their artificial deadlines promote. Instead, be more proactive in your giving decisions by identifying efficient and effective charities to support, then give generously. A well-researched giving decision is far more likely to result in increasing the impact of your donation than is donating on the (most likely) false or contrived promise that your donation will be “doubled.”

Charity matching donation campaigns are sometimes little more than marketing spin and won't increase the value of your contribution in many cases...

Charity matching donation campaigns are sometimes little more than marketing spin and won't increase the value of your contributio...