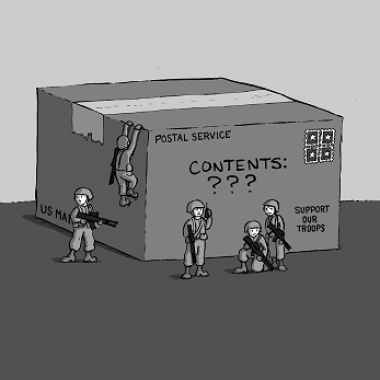 CharityWatch has identified a history of troubling financial reporting by AdoptaPlatoon Soldier Support Effort (AdoptaPlatoon) that earned it “?” ratings from CharityWatch since its 2012 fiscal year, and an "F" rating for 2017. AdoptaPlatoon’s claimed mission is “providing on-going care packages to improve quality of life and raising morale for those serving overseas in the Army, Air Force, Navy, Marine Corp, Coast Guard and Special Forces.” AdoptaPlatoon solicits cash donations as well as non-cash care packages, and, according to its website, ships “300 to 500 care packages” from the “Troop Support Warehouse every day in support of our deployed U.S. Service Men and Women.” Unfortunately, AdoptaPlatoon’s failure to provide adequate reporting on what is in its care packages, what they are worth, or the number of troops receiving them, leaves a lot to be desired.

No Reporting Detail for Over $8 Million in "Care Packages"

Despite reporting $8.3 million in grants to domestic individuals in the expense statement of its 2014 annual tax filing, AdoptaPlatoon responded “no” in the same filing to the IRS question: “Did the organization report more than $5,000 of grants and other assistance to or for domestic individuals…?” When charities respond “yes” to this question, IRS instructions direct them to complete a separate schedule detailing additional information, such as a description of each type of assistance provided and their corresponding dollar values. CharityWatch contacted AdoptaPlatoon in 2015 with a series of questions about its financial reporting and received a response from the charity’s auditor, Don Wilson. In response to our question as to why the charity did not complete the required schedule quantifying its nearly $8.3 million in claimed 2014 grants, Wilson stated that “the organization has no means of identifying the individual military service member that received the care package. Care packages were shipped to a UNIT, platoon, company/battery or a chaplain that distributed the package contents to individuals.” But language in the charity’s 2014 tax filing contradicts the auditor’s claim. In its 2014 IRS Form 990, Schedule I, Schedule of Grants and Other Assistance to Domestic Individuals, AdoptaPlatoon states that it “has listings of individual service members and or family members that received assistance.” If the tax form reporting is to be believed, this means that the charity did possess information about grant recipients and simply chose not to report it in its tax filing. Whereas, if the auditor is to be believed, this means that AdoptaPlatoon is reporting incorrect information to the IRS and the public about its ability to track grants made to specific service members. In his correspondence the auditor stated, “Even if we know the name and or address of the receiving service member we would not disclose such information, as the Department of Defense (DOD) has asked the organization not to disclose troop locations, or any information that could reveal troop movements, locations, type of unit, or reasons for assistance.” However, CharityWatch never asked for a list of names of individual grant recipients or information that could reveal troop locations. Rather, we requested only that AdoptaPlatoon disclose the information required by the IRS on Schedule I of the Form 990. Per IRS instructions, this includes only: the types of assistance provided, or the purpose or use of grant funds; the number of recipients for each type of assistance; the aggregate dollar amount of cash grants for each type of grant or assistance; the fair market value of any non-cash grants; and a description of any non-cash grants provided, such as medical supplies, blankets, equipment, etc.    This is not the first time CharityWatch has observed an "F"-rated charity citing broad security, safety, or privacy concerns as justification for omitting from its public disclosures even the most basic information about its grant-making activities. While CharityWatch understands a charity’s responsibility to comply with DOD directives and to protect highly sensitive information, this does not give charities license to altogether avoid describing and quantifying their reported grant spending. AdoptaPlatoon could easily have accounted for its claimed $8.3 million in program grants by providing all or most of the information required by Schedule I without disclosing troop locations or movements. Instead, AdoptaPlatoon’s only public accounting of who received its grants consisted of a single sentence: “Various US Military Service Members And Or Families of Service Members.” The charity reported no information whatsoever in its tax form about what was included in the care packages, how many service members received them, or how they were being valued. Without this basic information a donor has no way to judge whether the items AdoptaPlatoon included in its care packages were appropriate or useful; what AdoptaPlatoon spent on each care package; or if the charity helped a reasonable number of troops relative to the $10 million it spent in 2014 on claimed grants, overhead, fundraising, and other program expenses. The lack of disclosure also makes it impossible to determine whether AdoptaPlatoon’s $8.3 million in reported grants included only actual grants, or if the charity lumped in fundraising or other overhead expenses with this amount.

CharityWatch contacted AdoptaPlatoon in 2013 and asked the charity directly whether or not it was including any fundraising expenses in its reported $6.7 million of 2012 grants. We also asked it to provide a breakout of the specific dollar amounts of any fundraising-related items. AdoptaPlatoon’s executive director responded that the reported grant expenses “do contain some of the [fundraising expense] items mentioned in your letter; however, these functional expenses are not considered fundraising expenses.” This response, which did not include the breakouts we requested, is not in keeping with IRS instructions regarding the types of expenses that charities are allowed to report on this line of the tax form. Further, AdoptaPlatoon disregarded our request for a list of the amounts of cash and non-cash assistance provided to grant recipients. While accounting rules do allow charities wide latitude to report fundraising expenses in varying ways, the IRS does not allow fundraising expenses to be lumped in with a charity’s reported grant expenses on the tax Form 990. Possibly in response to CharityWatch’s repeated inquiries, AdoptaPlatoon’s grant reporting changed drastically in recent years. The charity’s reported grants fell from $8.3 million in 2014 to $0.00 in 2015, 2016, and 2017, according to its tax filings for those years. Instead, it is now reporting the majority of its annual expenses on only a few lines of its tax forms. AdoptaPlatoon claims that of its total 2015 expenses of $8.5 million, about $7.2 million consisted of “Other Expenses.” These are described as $178,818 in “Troop Support,” $1.1 million in “Troop Support Supplies,” $881,438 in “Troop Support Postal,” and $5 million described as “All other expenses.” Similarly, of its total 2016 expenses of $7.7 million, AdoptaPlatoon reports that $6.6 million consisted of “Other Expenses.” Of this amount, $4.1 million was described as “Troop Support Postal Printing,” and $2.5 million was reported as “Troop Support Supplies.” By lumping its spending on “troop support” in with other expenses, AdoptaPlatoon avoids the additional disclosure requirements that are triggered when expenses are reported on IRS-designated lines – disclosure that would describe and quantify the types of support being sent to troops and its corresponding dollar value. The charity’s drastic drop in reported fundraising expenses beginning in 2012 coincides with its questionable grant reporting from 2012 to 2014, which continued when it seemingly replaced its reporting of grant expenses with “Other Expenses” beginning in 2015. CharityWatch assigned AdoptaPlatoon “?” ratings for all rating years from 2012 to 2016 due to our ongoing concern that the charity may have been masking payments to professional fundraisers and/or burying its in-house fundraising expenses within its program grants and “Other Expenses.” CharityWatch suspects that AdoptaPlatoon’s financial efficiency from 2012 to 2016 may have been drastically worse than what it reported in its tax filings for those years.

For 2017, AdoptaPlatoon reports in its annual tax filing that nearly $5.8 million of its total reported expenses of $7 million consisted of “Troop Support Postal Printin[g].” The charity counts $3.3 million of this amount as program expenses. A review of the charity’s audited financial statements for the same year reveals that only about $1.4 million of this amount consists of “Troop Support,” and neither the audit nor the tax filing includes a description of what types of assistance were provided or how many units or troops received grants. The remainder of approximately $1.9 million is reported in the audit as “Education,” and in the tax filing as “joint costs from a combined educational campaign and fundraising solicitation.” AdoptaPlatoon’s program expenses for 2017 amounted to just over $2 million, or 29% of total annual expenses, once this $1.9 million of joint cost solicitation-related expenses is reallocated to fundraising.

As a separate matter, CharityWatch is also concerned about AdoptaPlatoon’s understanding of its employment tax obligations. The charity made the following statement in Schedule O of its 2017 tax Form 990:  "The organization did not file any federal employment tax returns because it considered itself tax exempted." The charity made a similar statement in its 2016 tax filing. Public charities are exempt from paying income tax on most sources of revenue, and are also generally exempt from paying federal unemployment tax, or FUTA, on behalf of their employees. However, public charities are not exempt from filing federal employment tax returns, withholding state and federal income taxes, or paying related Social Security and Medicare (FICA) taxes on behalf of their employees. In a different section of its 2017 and 2016 tax filings, AdoptaPlatoon reports that it employed 14 people and 21 people, respectively. If it is the case that AdoptAPlatoon did not file federal employment tax returns, withhold required taxes, or pay employer taxes in 2017 and prior years, it may be subject to IRS back taxes, interest, and penalties.

Despite the many ongoing concerns CharityWatch has identified with AdoptaPlatoon’s financial reporting over multiple years, the charity displays a “Best in America” seal on the home page of its website. It also enjoys a perfect “Accountability and Transparency” rating (four out of four stars) from Charity Navigator for each of the fiscal years 2014, 2015, and 2016, and a rating of three out of four stars for 2017. As CharityWatch has reported in the past, charities can be incentivized to fudge or exaggerate their program spending in their tax forms with the knowledge that this reporting is often processed by the software or staff of charity raters using primarily automated systems that do not make judgments about the accuracy of the reporting. For example, Charity Navigator reported that AdoptaPlatoon spent 92.5%, 92.9%, 88.9%, and 70.2% of its total budget on programs (including reported grants to service members) in 2014, 2015, 2016, and 2017, respectively. Donors who rely on this information may be disappointed to learn that charities with high ratings or glowing reviews from some sources may not be spending their donations as advertised. CharityWatch computes AdoptaPlatoon’s program spending in 2017 to be only 29% of total expenses, earning it an "F" rating.

Given our many concerns about the reliability of AdoptaPlatoon’s financial reporting, CharityWatch encourages donors to exercise caution if considering donating to AdoptaPlatoon. For a list of highly rated Veterans & Military charities that have also met CharityWatch’s governance and transparency standards, see our Top-Rated list.

The mission of HeroBox is simple. Through its website at herobox.org, the charity matches deployed soldiers’ wish lists for comfort supplies with willing donors. Donors can choose to sponsor a soldier, referred to as a “h...

The mission of HeroBox is simple. Through its website at herobox.org, the charity matches deployed soldiers’ wish lists for comf...

(Updated Nov 30, 2020) Officers and directors of the military charity, Move America Forward, have been accused of using charitable contributions to enrich themselves while misrepresenting to the public the percentage of donations ...

(Updated Nov 30, 2020) Officers and directors of the military charity, Move America Forward, have been accused of using charitable...